Via Stuart Staniford, here is a chart of Iranian oil production. It dropped in 2008, probably due to the Great Recession, then plateaued for a while, and then began a steep plunge in the middle of last year. “So the sanctions are definitely biting,” Stuart says, and “revenue will likely have dropped much more than production (since only a fraction of production is exported and prices paid will have dropped as Iran’s few remaining customers use their leverage to extract price concessions).”

Nonetheless, Iran has shown no signs so far of bowing to international pressure to abandon its uranium enrichment facilities. On the contrary, it’s speeding things up. This leads Charles Krauthammer to endorse Anthony Cordesman’s proposal for dealing with Iran: establish clear red lines, offer generous terms for giving up their uranium enrichment, and then make it crystal clear that we will use military action to destroy their enrichment facilities if they continue to hold out. This is an alternative that I suspect will gain an increasing number of fans as the Iran stalemate goes on. There are even occasional moments when I’m one of them, though this isn’t one of them. This is, unfortunately, not a problem with any good solutions. 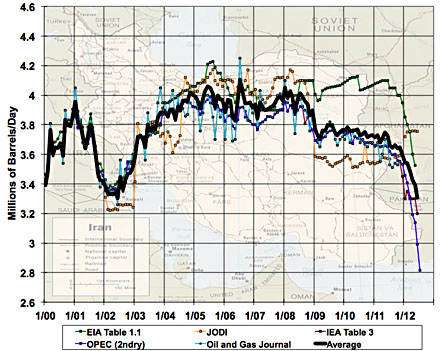