Sam Wang of the Princeton Election Consortium, who had a pretty good forecasting record in 2008, writes to suggest that we might all be missing the boat on Paul Ryan. Although Ryan might not have a big influence on the presidential race, he could very well have a big influence on whether Democrats maintain the control of the Senate:

What if the Romney-Ryan ticket causes candidates to campaign explicitly on GOP budget priorities? Imagine that slightly more voters switch their votes in one direction or the other based on what they hear. If 1% of voters flip toward Democrats, the resulting 2% swing leads to [an 82% chance of Democratic control]….Anyway, that’s what a knife-edge looks like. Pundits, please talk about this instead?

Obviously we don’t know what effect Ryan will have on down-ticket voters, but a 1% swing against Republicans certainly seems plausible. Either way, though, it does seem as though Ryan’s real influence could be much greater in congressional races than in the presidential contest. Wang’s charts are below. 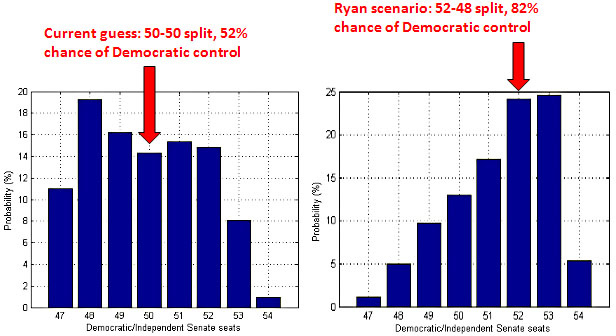