I don’t have the energy to fact check Paul Ryan’s convention speech because, really, who cares? It’s a convention speech. It’s designed to rally the troops, not get all the fiddly details right. As Dan Amira says, “Most of the millions of people who watched the speech on television tonight do not read fact-checks.” So there’s really not much incentive to tell the truth, is there?

(Though I will admit that his whopper about the closure of the Janesville GM plant had me looking around for something to throw at the TV set. Luckily, nothing came to hand.) 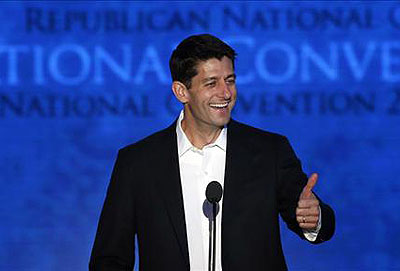 Anyway, Dan has a fact check here, Dave Weigel has one here, and Jon Cohn has one here, if you’re feeling masochistic. I’ll just say that my favorite part of the speech was this:

College graduates should not have to live out their 20s in their childhood bedrooms, staring up at fading Obama posters and wondering when they can move out and get going with life. Everyone who feels stuck in the Obama economy is right to focus on the here and now….None of us have to settle for the best this administration offers — a dull, adventureless journey from one entitlement to the next, a government-planned life, a country where everything is free but us.

Damn! That’s a helluva bleak country we live in right now. On a purely professional level, I have to admire the speechwriter who came up with this. He found a way to clearly imply grim Soviet-era socialist hellhole without actually saying the word “socialist,” which would have earned him much tsk-tsking from the chattering classes. Bravo, sir! But even more, I have to admire Ryan for having the balls to deliver this kind of turgid, John Galtesque line straight. As Harrison Ford famously told George Lucas during the filming of Star Wars, “George, you can type this shit, but you sure can’t say it.” But he was wrong, and Ryan proved this once again tonight. You can type that shit, and you can say it. You just have to believe.