The August jobs report is out, and it doesn’t have much good news. My usual monthly jobs chart is below: since the economy needs about 90,000 new jobs just to keep up with population growth, I subtract 90,000 from the raw jobs figures to show net new job creation. And what this shows is that we’re treading water: net job creation in August was basically zero. The initial June and July jobs numbers were also revised downward a bit.

However, in a reversal of last month, when the headline unemployment number went up (from 8.22% to 8.25%) even though more people were working, this month the unemployment number went down (to 8.11%) even though the jobs data was flat. This is because about half a million people dropped out of the labor force. Oddly, though, this is not because they joined the ranks of discouraged workers. In fact, the number of discouraged workers was down a bit. Long-term unemployment was also down. So there are a few small glimmers of good news here. However, when you dig below the surface of the report it mostly stays pretty bleak. Overall, it looks a lot as if net job creation has slowed to nearly nothing in the past five months. 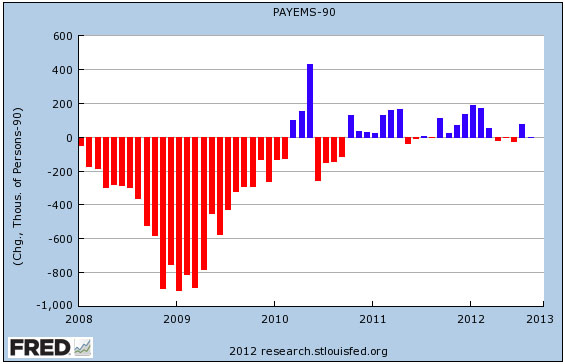