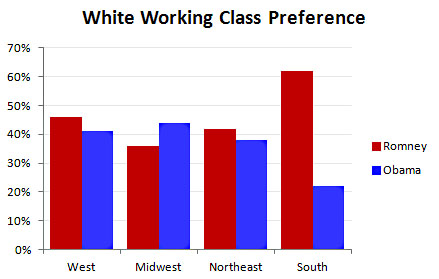 John Sides points out an important result from a recent survey of the white working class: Democrats in general, and Obama in particular, don’t really have a huge “white working class problem.” What they have is a huge Southern problem.

The chart on the right tells the story. In the West, Midwest, and Northeast, the white working class vote is fairly evenly split. Romney is slightly ahead in the West and Northeast, while Obama is slightly ahead in the Midwest. It’s only in the South that the white working class vote is overwhelmingly Republican, and this is what skews the national results, which show Romney ahead 48%-35%.

This is a worthwhile corrective almost anytime you see a national result for any class of voters or any trend over the past 40 years. The massive shift of the Southern vote from Democratic to Republican is, by far, the biggest electoral change in the past few decades, and it often overwhelms national survey results. It’s something you should always at least think about when you read an article about big changes in the electorate: is this really a national change, or is it mostly driven by changes in the South? This is important not just academically, but because if it turns out to be primarily a Southern problem, the solution is going to be a lot different than if it’s truly a broad demographic shift.

The rest of the survey is here, and it’s interesting throughout. It’s worth a read.