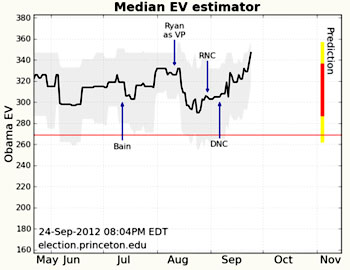 Nate Silver has an epic post today about late September polls from past years and how well they predict the eventual winner of a presidential race. Here are the highlights:

Read the whole thing for more. At the moment, though, the race is pretty clearly Obama’s to lose. And Sam Wang agrees: his latest electoral vote forecast has Obama winning 347-191. Given all this, I’ll make two predictions of my own:

Make your own predictions in comments!