Here’s the latest version of Sam Wang’s meta-analysis of how the presidential campaign is going. I’m putting it up for one reason: to show just how little outside events seem to matter. After a couple of months that featured a series of gaffes that hurt Romney, a VP choice that seemed to help him, the Todd Akin affair, a poorly-received GOP convention, and a well-received Democratic convention — after all that, Sam’s estimate right now is that Obama will receive 319 electoral votes to Romney’s 219. This is virtually the same as it was in May and June. The needle has barely moved at all. 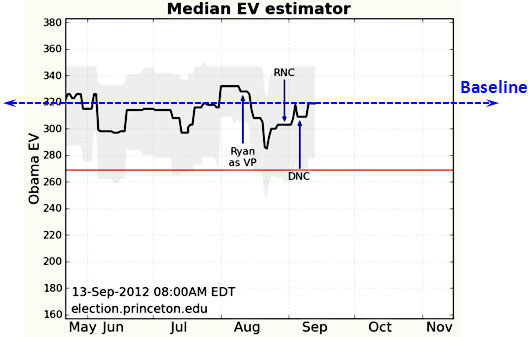