One of the knocks on the digital ecosphere is that it doesn’t really employ very many people. Facebook might be cool, but it doesn’t do much for the real economy. Ezra Klein grabs my attention today with a suggestion that this might be about to change:

Square, a company led by Twitter co-founder Jack Dorsey, has the potential to be a gamechanger. It wants to do nothing less than change how we pay for everything. In doing so, it has the potential to vastly lower transaction costs for businesses that accept credit, and to significantly increase the number of transactions that happen, period. If it works, that could be a transformative advance.

Wait. Seriously? Is that what people are saying? So I clicked on the Farhad Manjoo piece in Slate that Ezra was referring to:

If you study Square’s products and its pricing, and if you talk to Dorsey about his plans, you’ll find that the company’s real mission is to alter the psychology of consumption. Dorsey is bent on creating frictionless commerce….Its pay-by-name system is so much of an improvement over the current way we pay that, over time, Square believes it will raise transaction volumes—people will buy more stuff because buying stuff is easier.

The ability of Silicon Valley entrepreneurs to hold reporters in some kind of satanic thrall as they spin their mesmerizing tales is nothing short of awe-inspiring. Square might very well be a great company. Making it easier to pay for stuff 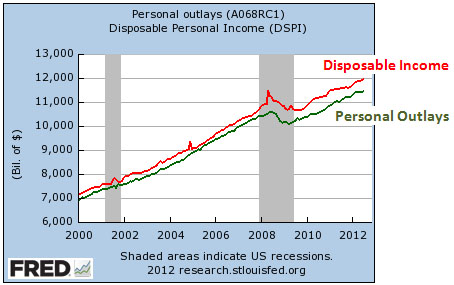 is a terrific idea. But will this actually cause us all to buy more stuff?

In a word, no. Putting aside changes in fiscal and monetary policy, consumer expenditures are constrained by (a) net income and (b) our desire to save for the future. That’s it. Right now, the personal savings rate is around 4%, which means we collectively spend about 96% of what we earn. Nothing that Square does will change that.1 It might be a great company — maybe even a game changer on a number of levels — but it’s not going to increase consumer spending at a macro level. Even Silicon Valley doesn’t have quite that much clout.

With that off my chest, however, I recommend clicking on both links above. They have interesting things to say.

1You can, perhaps, spin a tale about dramatically lower transaction costs putting more money in the hands of consumers and small business owners and less in the hands of Wall Street banks. This would be a good thing, and might even be a net positive for economic growth. But it’s a stretch, and I don’t think it’s the story Dorsey is telling anyway.