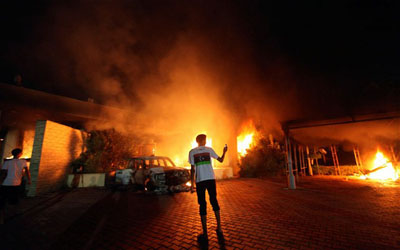 First Read responds to the Romney campaign’s contemptible rush to gain political advantage from the attacks on U.S. embassy personnel in Egypt and Libya last night:

Yesterday we noted that Mitt Romney, down in the polls after the convention, was throwing the kitchen sink at President Obama. Little did we know the kitchen sink would include — on the anniversary of 9/11 — one of the most over-the-top and (it turns out) incorrect attacks of the general-election campaign….This morning, we learned that the U.S. ambassador to Libya, Chris Stevens, and others died in one of the attacks.

Bottom line: This was news-cycle campaigning by the Romney campaign gone awry. Why didn’t the Romney campaign wait until it had all the facts? On his overseas trip in the summer, Romney was so careful not to criticize Obama while on foreign soil. But how much time do you give an administration to work through a diplomatic and international crisis before trying to score immediate political points? You’d expect the Sarah Palins of the world to quickly pounce on something like this, and she predictably did. But a presidential nominee running for the highest office in the land? After the facts have come out, last night’s Romney statement only feeds the narrative that his campaign is desperate.

The Romney campaign was so eager to issue its statement of outrage that they initially scheduled it for release at 12:01 am. Why? So that no one could claim they were trying to score political points on 9/11. But eventually their giddiness got the better of them and they let it go late Tuesday night.

These guys just don’t know when to quit. I don’t think there’s anything left that they won’t say or do if they think it might give them a 1% pop in the polls. They really don’t respect anything at all anymore.