The chart on the right shows the current state of polling for the generic congressional ballot. By “generic,” we’re talking about polling questions that don’t ask about specific candidates, but just ask which party you plan to vote for. For example: “If 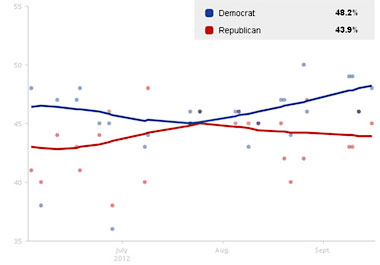 the election for the U.S. House of Representatives in November were being held today, would you vote for the Democratic candidate or the Republican candidate in your congressional district?”

At of today, Democrats lead the generic ballot by a little over four points. My initial reaction when I saw this was a shrug. My longtime understanding is that Democrats almost always do well in these polls, but on election day Republicans typically outperform the generic ballot by four or five points. So this result suggests that Republicans might lose some House seats but retain their majority.

That’s why I’m skeptical of Sam Wang’s most recent projection that Democrats have a 74% chance of retaking control of the House. In a post that’s gotten a lot of attention today, Sam basically says two things:

I’m sold on #2: the national vote really does correspond pretty closely to the actual number of seats won. But I’m not sold on #1 unless I see more evidence. It’s possible that my rule of thumb (Republicans outperform the generic ballot by four or five points) is only true for early polling, and by September that systematic edge goes away. Or maybe it goes away once the pollsters start consistently applying their likely voter screens. Or something. But one way or another, I’d like to see some evidence that generic ballots do a good job of predicting the eventual House vote. Until then, I remain skeptical that Democrats are really in the lead.