Here’s an interesting research tidbit — one that’s thankfully not related to politics in any way. You remember the marshmallow test, don’t you? Basically, you give kids a marshmallow and tell them they can either eat it now or, if they wait a few minutes, they can have two marshmallows. It turns out that the kids who are able to hold out do better later in life. It’s a test of impulse control and delayed gratification, and both those traits are highly useful in modern society.

But hold on. What if you don’t trust the researchers? If you don’t believe that they really will return with two marshmallows, then there’s not much point in showing any restraint, is there? You might as well just eat the marshmallow now. Some sneaky researchers at the 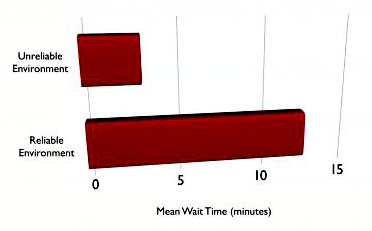 University of Rochester decided to test just that, setting up both “reliable” and “unreliable” environments for the kids:

In the unreliable condition, the children were provided a container of used crayons and told that if they could wait, the researcher would return shortly with a bigger and better set of new art supplies for their project. After two and a half minutes, the research returned with this explanation: “I’m sorry, but I made a mistake. We don’t have any other art supplies after all. But why don’t you use these instead?” She then helped to open the crayon container.

Guess what? When the kids got shafted by the researchers, they all ended up eating the marshmallow. They didn’t really believe the extra marshmallow would ever appear. The kids in the reliable environment, where the researchers did what they said they would, mostly waited.

The researchers’ conclusion is that self-control isn’t a purely innate ability. It also depends on how you were brought up. If things tend to get taken away from you if you don’t gobble them up right away, or if adults tend to make promises they don’t keep, you’re probably not going to be very interested in delayed gratification. In an environment like that, gratification delayed is gratification denied.

Now, despite the strong results these guys got, I’d still like to see their results replicated with different test setups and larger sample sizes. That said, however, this isn’t really a counterintuitive finding. Most cognitive traits are combinations of both nature and nurture in one way or another, so it’s no surprise that this one is too.