Earlier this morning Stephanie Mencimer asked, “Could Bush v. Gore Save Obama in Ohio?” You see, Ohio’s Republican legislature had ended early voting for everyone except active duty military and the Obama administration had taken them to court, arguing that if soldiers got to vote early, then everyone should get to vote early:

The Obama campaign challenged the move, and in August, a federal judge agreed that Ohio had violated the Constitution’s Equal Protection Clause by allowing some people to vote early but not others. In early October, the Sixth Circuit Court of Appeals upheld the decision and ordered Ohio to keep the polls open for the weekend for everyone if they do it for the military and overseas voters. The state has filed an emergency petition with the Supreme Court to overturn the order. The Obama campaign, naturally, is opposed, and has filed a brief arguing that Bush v. Gore demands that the court protect the integrity of the voting process.

….As a result, the court now will have to prove whether it was serious or simply partisan when it sided with Republicans by declaring that “[t]he right to vote is 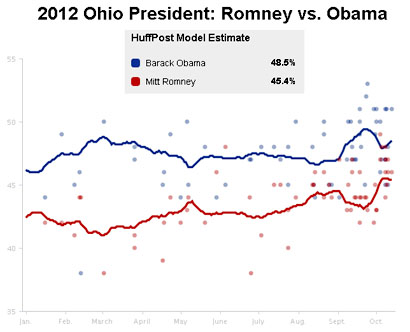 protected in more than the initial allocation of the franchise. Equal protection applies as well to the manner of its exercise.”

So how did that turn out? A few minutes ago we got the answer:

The United States Supreme Court has given the green light to early voting in Ohio in the three days prior to November’s election. The brief, one sentence order from the court Tuesday is a setback for Republican leaders in the state, who had asked the justices to step in and allow pending restrictions to take effect.

Ohio will appeal the ruling, but that takes time and won’t affect this year’s election. For now, Bush v. Gore has finally handed a small victory to Democrats. That’s good news for Obama in a state where he’s started to turn things around and needs all the help he can get.

UPDATE: Ari Berman points out that although the same rules now apply to everyone, Ohio Secretary of State Jon Husted is limiting early voting hours for the three days prior to the election. The Supreme Court’s ruling is good news for Obama, but Ohio Republicans are still doing their best to limit access to the polls.