Here is our updated aphorism for the day:

Depend upon it, sir, when a man knows a climate skeptic might be elected in a fortnight, it concentrates his mind wonderfully.

This wasn’t true last week for New York City mayor Michael Bloomberg, but apparently Hurricane Sandy has brought him down from Mount Olympus. Now his mind is concentrated quite wonderfully 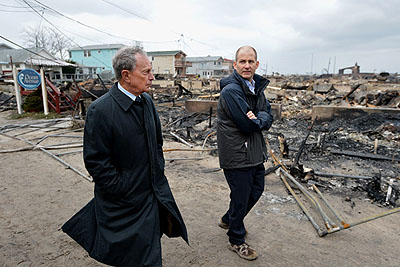 indeed, and today he endorsed Barack Obama for president:

Our climate is changing. And while the increase in extreme weather we have experienced in New York City and around the world may or may not be the result of it, the risk that it might be — given this week’s devastation — should compel all elected leaders to take immediate action.

….But we can’t do it alone. We need leadership from the White House — and over the past four years, President Barack Obama has taken major steps to reduce our carbon consumption, including setting higher fuel-efficiency standards for cars and trucks.

….Mitt Romney, too, has a history of tackling climate change. As governor of Massachusetts, he signed on to a regional cap-and-trade plan designed to reduce carbon emissions 10 percent below 1990 levels….But since then, he has reversed course, abandoning the very cap-and-trade program he once supported. This issue is too important. We need determined leadership at the national level to move the nation and the world forward.

While we’re on the subject, Scientific American’s Mark Fischetti has an interesting post on the subject of scary climate change stories, something that I’ve been writing about recently. My problem with the scary story genre is that it’s woefully insufficient when you’re dealing with a problem that’s essentially invisible and won’t seriously affect most of us for decades. Stories about imperceptible menaces just don’t pack enough of an emotional wallop. One solution, of course, is to write scary stories about events that are extremely concrete and very visible indeed. Like, say, Hurricane Sandy. The problem is that scientists tend to be pretty circumspect about blaming any individual hurricane on global warming. But Fischetti says that might be changing:

Hurricane Sandy has emboldened more scientists to directly link climate change and storms, without the hedge. On Monday, as Sandy came ashore in New Jersey, Jonathan Foley, director of the Institute on the Environment at the University of Minnesota, tweeted: “Would this kind of storm happen without climate change? Yes. Fueled by many factors. Is [the] storm stronger because of climate change? Yes.”

Raymond Bradley, director of the Climate Systems Research Center at the University of Massachusetts, was quoted in the Vancouver Sun saying: “When storms develop, when they do hit the coast, they are going to be bigger and I think that’s a fair statement that most people could sign onto.”

….Greg Laden, an anthropologist who blogs about culture and science, wrote this week in an online piece: “There is always going to be variation in temperature or some other weather related factor, but global warming raises the baseline. That’s true. But the corollary to that is NOT that you can’t link climate change to a given storm. All storms are weather, all weather is the immediate manifestation of climate, climate change is about climate.”

OK, this isn’t quite “climate change caused Hurricane Sandy.” But perhaps we’re moving in that direction. If we do, it could mark a sea change (if you’ll pardon the pun) in how the public views climate change. The more they see scientists linking it to concrete events—droughts in the Midwest, hurricanes in the Atlantic, wildfires in the West, icecaps disappearing in the Arctic—and the more they see scientists willing to make those links without caveating them to death, the more real climate change will become. Who knows? Maybe the scary story genre is in for a revival just at the moment I declared it dead.