The American economy beat expectations and added 171,000 new jobs last month. However, about 90,000 of those jobs were needed just to keep up with population growth, so net job growth is closer to 81,000 jobs. The chart below, which I update monthly, shows net job creation since the beginning of 2008, and the bottom line is that although job growth in October was higher than job growth in September, it was still fairly modest. This is pretty much the same story we’ve had all year: the economy is improving, but it’s not improving very fast. In other news, the labor participation rate was up a hair as more people started looking for work again, and as a result, unemployment ticked up slightly, from 7.80% to 7.88%. Also: revisions added 84,000 jobs to prior months’ data.

Politically, this is a wash. It’s decently good news, but it isn’t something Obama can crow about too much. Conversely, it’s nothing that Romney can get much traction with either. If you dig into the weeds, the unemployment rate was up fairly dramatically among blacks and among those without a high school diploma, but in both cases it was just a reversion to the trendline after a flukey low number last month. The number of discouraged workers was up slightly, and the number of long-term unemployed rose a few percentage points. That’s pretty much the worst news in the report. 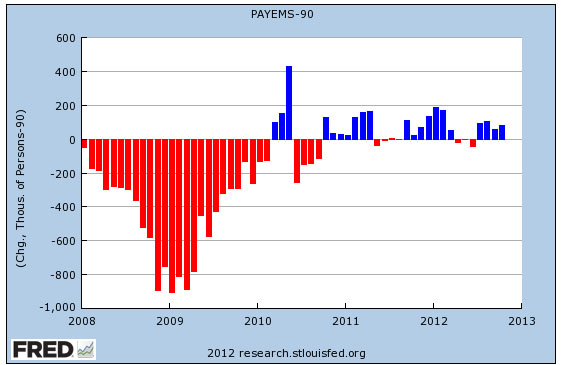