One of the key takeaways from the 2012 election is the fact that President Obama did well among blacks, Hispanics, and Asians, but poorly among whites. According to the national exit polls, Obama 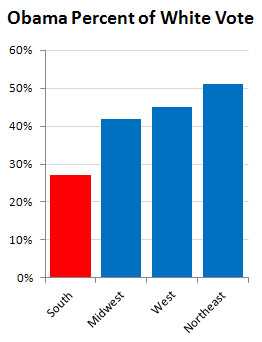 But that’s misleading. I don’t have access to the internals of the exit polls, but Pew did a survey shortly before the election that showed Obama winning by three percentage points. This is pretty close to the final result, so their detailed breakdowns are probably pretty accurate too. So what do they say about the white vote? Here it is in colorful bar chart format.

One of these bars is not like the other. Obviously Democrats could stand to do better with white voters in the West and Midwest, but the real reason for their poor national showing among whites is the South. Overall, Obama won about 46 percent of the white vote outside the South and 27 percent of the white vote in the South. That’s a difference of nearly 20 points. In other words: Democrats don’t have a white problem. They have a Southern white problem, and that’s a whole different thing. The press should be more careful about how they report this.