Steve Benen draws my attention to Sen. Lindsey Graham’s comments on Face the Nation yesterday regarding a “grand bargain” on deficit reduction:

Really? Most Republicans will agree to this? Can we talk?

First: Of the $2.1 trillion in discretionary spending cuts proposed by Simpson-Bowles, we’ve already enacted $1.5 trillion of them. That doesn’t count any of the fiscal cliff/staircase stuff, either. It’s all solid cuts. So if we “say yes” to Simpson-Bowles, it means we’re saying yes to only a small amount of additional discretionary cuts. (There are also some Social Security and Medicare proposals in the plan, but for now I’m just focusing on the tax and discretionary spending stuff.)

Second: Has Graham actually read the tax proposal in Simpson-Bowles? I’ve annotated it below for easy reference, but just to hit some of the highlights:

Does Graham really think Republicans would agree to this? It’s true that ordinary income tax rates would go down under this proposal, but total taxes paid would go up significantly, especially at the high end. House Republicans refused to support this back when it was first proposed, and I can’t think of any reason they’d support it now. Especially when this $2.6 trillion tax increase would be complemented by only modest additional discretionary spending cuts. What does Graham think he knows that I don’t? 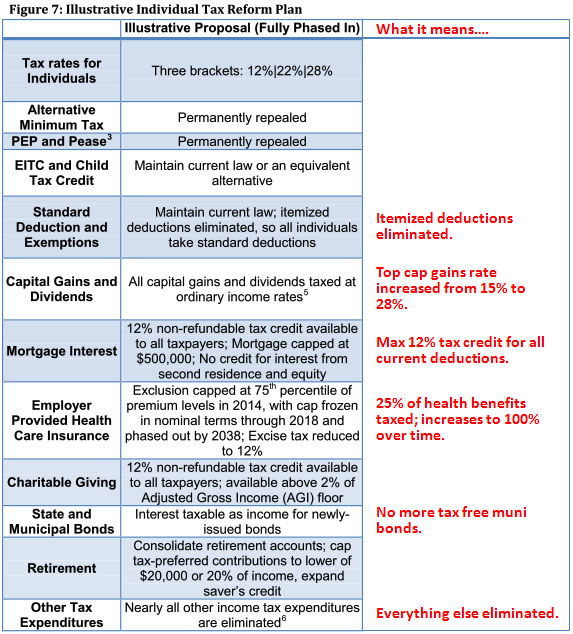