Here’s my penultimate update on the status of the most popular presidential forecasting models. On the top are Nate Silver and Andrew Tanenbaum; on the bottom are Sam Wang and Josh Putnam. Sam’s model showed an unnerving single-day decline in Obama’s numbers today, but all four models still predict a convincing Democratic victory, with Obama winning an average of 305 electoral votes. 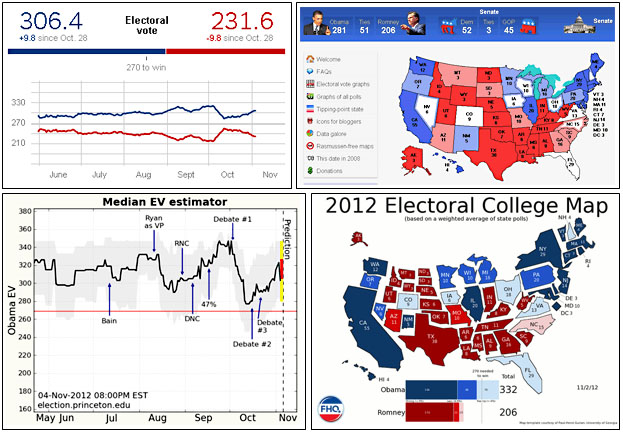 So what are the odds that these models are wrong? The basic polling itself is almost certainly sound, so there are really only two ways that the polls could be significantly off:

But suppose there is a systematic bias in the polls. How big would it have to be in order for Romney to win? This is what Sam Wang’s “meta-margin” tells us, and it currently stands at 2.72%. That’s how far off the polls would have to be—either because undecideds break heavily for Romney or because the pollsters’ likely voter screens are wrong—in order for Romney to win, and it’s a pretty big number. It’s unlikely that either of these effects is anywhere near that large.

What else? Conservatives are currently pinning some of their hopes on poll internals, which show independents breaking strongly for Romney. However, Nate Cohn suggests this is just an artifact of the Republican Party’s lousy brand image these days: the tea party has driven away lots of centrist Republicans, who now call themselves independents even though they still plan to vote for Romney. This is likely what’s driving up Romney’s share of the “independent” vote.

For myself, I’m still predicting an Obama win for two reasons. First, models that are based on fundamentals suggest that Obama—an incumbent presiding over a so-so economy—should score a modest win. Second, Obama is leading in nearly all the polls two days before the election, and that also suggests a modest win. There’s no magic here. Both of the models that seem like reliable predictors are pointing in the same direction, so that’s the direction I’m leaning too. I guess I’d add to that one anecdotal piece of evidence: the Romney campaign is spending a lot of time complaining that the polls are wrong, and that’s usually something that only losing campaigns do. In any case, we’ll know in 48 hours.