Democrats won over half the vote in House races this year, but still got blown out by Republicans, who return to Washington with a big majority of seats. Why? The obvious story is gerrymandering: Republicans in state legislatures drew themselves a whole lot of cozy districts last year that made it hard for Democrats to win.

Personally, I’ve been skeptical of this story for a couple of reasons. First, the research I’ve read in the past suggests that gerrymandering has only a modest effect. Not zero, but not huge, either. Second, as you may recall, Republicans blew the doors off Democrats in 2010, before any of this gerrymandering was done. That means they were the 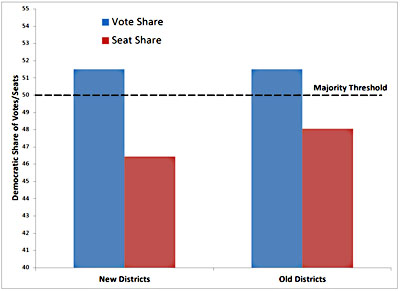 incumbent party going into 2012, and incumbents have a natural advantage.

But this is just my guess. What does the Science™ say? Eric McGhee brings the analysis:

We’ll drop our regular model and go bare bones. Two steps: 1) identify the relationship between this year’s actual election returns and the 2008 presidential vote in each district (calculated by Daily Kos), 2) use this relationship plus the 2008 presidential vote in the old districts to estimate what would have happened under the old lines. No incumbency, no assumptions about national climate. For the redistricting story to hold, this exercise must eliminate the discrepancy between Democratic vote share and seat share. Otherwise, something else is going on.

….Democrats do gain more seats under this simulation—seven more total—but fall far short of matching their predicted vote share. The point should be clear: even under the most generous assumptions, redistricting explains less than half the gap between vote share and seat share this election cycle.

In other words, even with the old 2008 district lines, Republicans still would have won a majority of seats this year. The new lines gave them, at most, seven additional seats, and McGhee thinks that even this probably overstates things. Bottom line: gerrymandering isn’t nothing, but it’s not a game changer. It’s not the real story here.