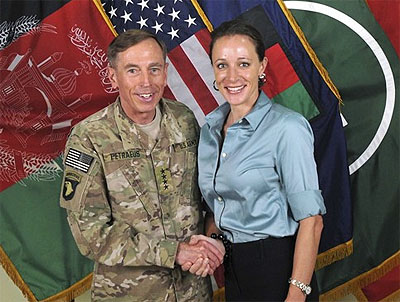 A couple of days ago I wondered out loud how a few harassing emails received by Jill Kelley had prompted the FBI to open a full-bore cyberstalking investigation, something that I suspect they don’t do routinely. Turns out I had no idea just how odd this was. Here’s what we learned today about Kelley’s complaint to her FBI agent friend:

The emails that Jill Kelley showed an FBI friend near the start of last summer were not jealous lover warnings like “stay away from my man,” a knowledgeable source tells The Daily Beast….“More like, ‘Who do you think you are? … You parade around the base … You need to take it down a notch,’” according to the source, who was until recently at the highest levels of the intelligence community and prefers not to be identified by name

….When the FBI friend showed the emails to the cyber squad in the Tampa field office, her fellow agents noted that the absence of any overt threats.  “No, ‘I’ll kill you’ or ‘I’ll burn your house down,’” the source says. “It doesn’t seem really that bad.”

The squad was not even sure the case was worth pursuing, the source says. “What does this mean? There’s no threat there. This is against the law?” the agents asked themselves by the source’s account. At most the messages were harassing. The cyber squad had to consult the statute books in its effort to determine whether there was adequate legal cause to open a case. “It was a close call,” the source says.

What tipped it may have been Kelley’s friendship with the agent. The squad opened a case, though with no expectation it would turn into anything significant.

Ah yes, Kelley’s friendship with the agent. What’s up with that, anyway?

The FBI agent who started the case was a friend of Jill Kelley….That agent referred it to a cyber crimes unit, which opened an investigation. However, supervisors soon became concerned that the initial agent might have grown obsessed with the matter, and prohibited him from any role in the investigation, according to the officials.

The FBI officials found that he had sent shirtless pictures of himself to Ms. Kelley, according to the people familiar with the probe.

And here’s a bit more about our besotted FBI agent:

Later, the agent became convinced — incorrectly, the official said — that the case had stalled. Because of his “worldview,” as the official put it, he suspected a politically motivated cover-up to protect President Obama. The agent alerted Eric Cantor, the House majority leader, who called the F.B.I. director, Robert S. Mueller III, on Oct. 31 to tell him of the agent’s concerns.

If the Washington Post is to be believed, this agent’s conspiratorial worldview (thanks, Fox News!) is what caused the whole thing to unravel. The FBI was apparently ready to close the case after it concluded that no laws had been broken and national security hadn’t been compromised, but that was before our dittohead FBI agent decided he needed to make sure Obama paid for his misdeeds:

At some point during the summer, the Tampa FBI agent whom Kelley had first approached for help […] got in touch with the office of Rep. Dave Reichert (R-Wash.). Reichert passed the information on to House Majority Leader Eric Cantor (R-Va.).

“I was contacted by an F.B.I. employee concerned that sensitive, classified information may have been compromised and made certain Director Mueller was aware of these serious allegations and the potential risk to our national security,” Cantor said in a statement.

Cantor contacted FBI Director Robert S. Mueller III on Oct. 31, and a week later [James] Clapper told Petraeus he needed to resign. “I don’t know if it would have taken this course without Cantor,” a person close to the inquiry said.

This is pretty rich. If you connect the dots, it seems as if this whole thing got started by a smitten FBI agent; would have been closed without charges; but then got reenergized by some Benghazi-fueled (?) concerns that Petraeus was covering up for Obama. Or something. In the end, Petraeus was undone by the wingnuts.

I’m not usually all that super fascinated by tittle tattle, but something about this investigation just screams that there’s more here than meets the eye. I’m not sure there was anything especially scandalous about all this—though there might be!—but I’d sure like to know more about how the whole thing unfolded.