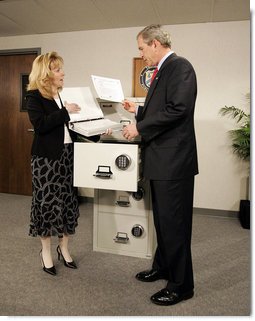 Charles Krauthammer is upset that Dick Durbin says Social Security is off the table in the fiscal cliff negotiations because it doesn’t add to the deficit:

This is absurd. In 2012, Social Security adds $165 billion to the deficit. Democrats pretend that Social Security is covered through 2033 by its trust fund. Except that the trust fund is a fiction, a mere “bookkeeping” device, as the Office of Management and Budget itself has written. The trust fund’s IOUs “do not consist of real economic assets that can be drawn down in the future to fund benefits.” Future benefits “will have to be financed by raising taxes, borrowing from the public, or reducing benefits or other expenditures.”

What Krauthammer means is that as Social Security draws down its trust fund, it sells bonds back to the Treasury. The money it gets for those bonds comes from the general fund, which means that it does indeed have an effect on the deficit.

That much is true. But the idea that the trust fund is a “fiction” is absolutely wrong. And since this zombie notion is bound to come up repeatedly over the next few weeks, it’s worth explaining why it’s wrong. So here it is.

Starting in 1983, the payroll tax was deliberately set higher than it needed to be to cover payments to retirees. For the next 30 years, this extra money was sent to the Treasury, and this windfall allowed income tax rates to be lower than they otherwise would have been. During this period, people who paid payroll taxes suffered from this arrangement, while people who paid income taxes benefited.

Now things have turned around. As the baby boomers have started to retire, payroll taxes are less than they need to be to cover payments to retirees. To make up this shortfall, the Treasury is paying back the money it got over the past 30 years, and this means that income taxes need to be higher than they otherwise would be. For the next few decades, people who pay payroll taxes will benefit from this arrangement, while people who pay income taxes will suffer.

The trust fund is the physical embodiment of that deal. It’s no surprise that the rich, who didn’t object to this arrangement when it was first made, are now having second thoughts. But make no mistake. When wealthy pundits like Krauthammer claim that the trust fund is a fiction, they’re trying to renege on a deal halfway through because they don’t want to pay back the loans they got.

As it happens, I think this was a dumb deal. But that doesn’t matter. It’s the deal we made, and the poor and the middle class kept up their end of it for 30 years. Now it’s time for the rich to keep up their end of the deal. Unless you think that promises are just so much wastepaper, this is the farthest thing imaginable from fiction. It’s as real as taxes.