Why is happiness U-shaped? In countries around the world, people tend to get less happy up through about age 50 or so, and then rebound and get happier as they age. The Los Angeles Times provides us with the usual explanation:

By midlife, youth’s hot-blooded drive to mastery has driven off. Responsibilities abound. Decades of striving — to raise a family, to establish oneself in the community, to climb the professional ziggurat — have shown us the mountaintop and, with it, the limits of our reach and usefulness. A recognition of our mortality settles in. In the years after midlife, the theory goes, humans shoulder fewer burdens for the care of others. Their time horizons are shorter, prompting them to focus on people 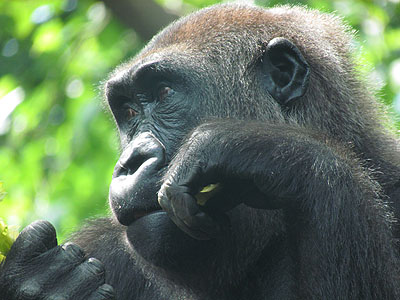 and activities that give pleasure and meaning to their lives. They regret less.

That’s a very convincing narrative, and we humans love narratives, don’t we? But guess what? It turns out that great apes, who feel none of these things, also experience U-shaped happiness:

When the composite well-being score for each ape was plotted according to his or her age, the result was the same distinctive U-shaped curve seen universally in humans. Around the ages of 28 and 35 — roughly the midpoint of the chimpanzees’ and orangutans’ expected life spans — moods sagged, animals became less socially engaged and they were less likely to persist in attaining the things they desired.

….For social scientists who saw shifts in happiness in strictly human terms, the findings were a forceful reminder that people have not evolved as far as we may think beyond the great apes, said Stacey Wood, a neuropsychologist at Scripps College in Claremont who wasn’t involved in the study.

….”It pushes more toward the possibility that this is biological,” added Arthur Stone, a professor of psychiatry at Stony Brook University in New York who was not involved with the study. Whether it’s hormones, brain structure, neurochemicals or some other factor that causes the middle-aged psyche to power down will require further research, Stone said. But from now on, he said, social explanations alone will not suffice.

So free will takes another hit. But then, I would say that, wouldn’t I?