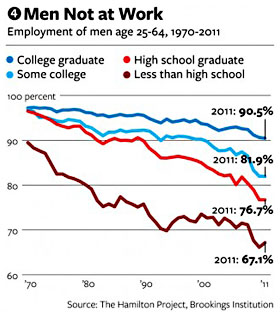 Via Ed Kilgore, I see that Jonathan Rauch has a stimulating piece in National Journal about the long-term exit of men from the workforce. This is especially true of men with high-school educations or less:

Both men and women have suffered from the disappearance of well-paying mid-skilled jobs in factories and offices. But they have responded very differently. “Women have been up-skilling very rapidly,” said MIT’s [David] Autor, “whereas men have been much, much less successful in adapting.” Women have responded to the labor market’s increased preference for brains over brawn by streaming through college and into the workforce—one of the great successes of the U.S. economy. Men’s rate of completing college has barely budged since the late 1970s.

To women, men who either can’t or don’t earn a decent living are less necessary and desirable as mates; they’re just another mouth to feed. This helps to explain why rates of out-of-wedlock childbirth have risen to hitherto unimaginable heights among the less educated. Causality also flows in the opposite direction. The very fact of being married brings men a premium in their earnings, research shows, and makes them steadier workers, presumably because they have more stability at home. “Marriage is an institution that makes men more responsible in their pursuit of work and in their work-related duties,” said Brad Wilcox, a University of Virginia sociologist who directs the National Marriage Project.

I think this is actually even worse than Autor suggests. Yes, women upskilled as they broke free of postwar gender constraints starting in the 60s, but that trend has pretty much run its course. Female labor force participation peaked around 2000, and since then it’s been falling too.

But will any of that work? Craft work has long since given way to factory work, and if Chinese workers will do factory work for less than American workers, then more vocational education won’t do much good. Likewise, if there just aren’t enough jobs for the weakly educated, stigmatizing nonwork won’t do any good either. It will just immiserate people for no reason. And the kind of people who are most affected by all this—high-school dropouts and those who barely got diplomas—aren’t going to college no matter how much we push them. It’s just not going to happen.

It’s hard to be optimistic here. Until about 2000 or so, you could argue that declining male labor force participation was mostly due to increasing female participation. But that doesn’t wash anymore. Since 2000, work attachment has been going down for everyone. There’s something else going on, and I suspect it’s very strongly related to increased automation. We’ve seen this especially strongly since the 2008 recession, as businesses let go of millions of workers and then discovered they just flatly didn’t need them back when the economy started to recover.

This is only going to get worse as automation gets better and better. Things will probably improve a bit in the short term as the economy continues to recover from the Great Recession (assuming we don’t idiotically force ourselves into a double-dip via bad fiscal policy). But the longer-term trend is pretty stark, and it’s not clear what the answer is. I’m not sure there is one.