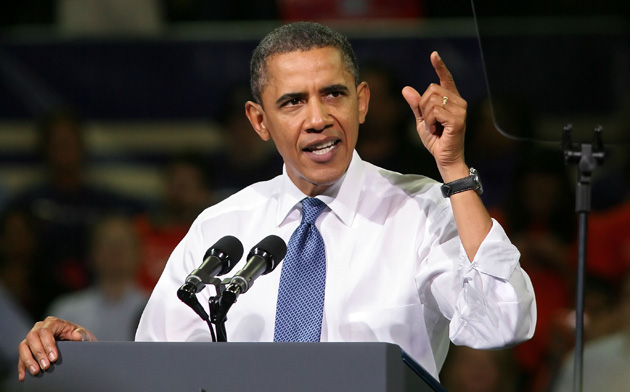 What happens after we get a deal on the fiscal cliff? If Republicans are to be believed, we’ll just sail right into a second crisis, this time over raising the debt ceiling. They’re insisting that, once again, they’ll refuse to raise the ceiling unless President Obama agrees to massive spending cuts.

We’ll see. But it’s worth pondering what Obama’s options are for simply ignoring the debt ceiling and continuing to spend money regardless of whether Republicans agree to raise it. Several theories have been floating around since the first debt ceiling crisis last year. Here they are:

During the last debt ceiling fight, Obama never suggested he’d resort to unilateral action like this. Partly that’s because he genuinely wanted to make a “grand bargain” on spending, and the debt ceiling fight was pretty good political cover for that. This time he doesn’t, so he might be more likely to try it. However, one interesting question about this is whether he’s ever asked the Office of Legal Counsel for an opinion about any of these theories. If he has, and it was negative, that would probably restrain him. If he hasn’t, he’d probably need to in order to maintain his credibility on the issue. That’s a risk, of course, since there’s no telling what OLC’s lawyers would come up with. There’s a political risk too: Congressional Republicans could go ballistic and become even more obstreperous than they are now. Fun times.

UPDATE: Via Twitter, Brian Beutler reminds me that OLC has given guidance to Obama on the 14th Amendment question. We just don’t know what they said. However, given Obama’s comments at the time, they probably told him no dice.

UPDATE 2: Several people have pushed back on my dismissal of the platinum coin ploy. I’m not a lawyer, but my sense is that this is so wildly contrary to the intent of the law, which was to allow the Treasury to issue commemorative and bullion coins, that a court probably would intervene if the president tried to pull this off. The other ploys are at at least minimally plausible, but this one is banana republic territory.

UPDATE 3: For what it’s worth, I agree that the president’s best option is to simply start shutting down chunks of the government if Congress refuses to raise the debt ceiling. Republicans seem to have convinced themselves that the lessons of 1995 no longer apply, but I think they do. This would be a PR disaster for them. They’d cave before long.

The thing they don’t understand is that Obama wasn’t playing hardball in 2011. He actually wanted a deal, and they were nuts not to take him up on it. This time he doesn’t, and he has the power and the credibility to make sure that Republicans take the blame when national parks get closed and passports stop getting issued.