The New America Foundation’s website was down yesterday, so I was unable to read Steven Teles’s new essay, “Kludgeocracy: The American Way of Policy.” Who wouldn’t want to read an essay with a great title like that? Especially if it comes from Steven Teles?

This morning the hamsters over at NAF were once again powering their servers, so I hopped over and looked through it. It’s well worth a read, as Teles takes a whirlwind tour through the causes and costs of America’s wildly complicated and overlapping set of tax, regulatory, and social policies. The causes are 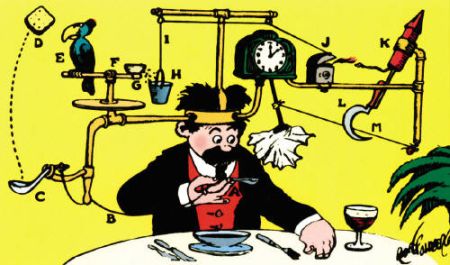 numerous, he suggests, including federalism, voter ambivalence, and, possibly most important, the fact that it benefits the rich and powerful:

Policy complexity is valuable for those seeking to extract rents from government because it muddies the waters, making it hard to see just who is benefitting and how, and so obscuring the actual mechanism of political action that it is difficult to mobilize against it. That’s why business prefers its benefits in the tax code, or in obscure regulatory advantages, rather than in straightforward handouts from the state. Politicians may posture against “corporate welfare,” but kludgeocracy makes it hard for the public to focus on the various handouts to business, and thus to effectively target their anger. The consequence is that anger diffuses onto our system of government as a whole, leading to a loss of trust and cynicism at the possibility that the public sector can be an efficient instrument of the public good.

….Kludgeocracy is also bad for liberalism by creating both the reality and image that government is incompetent and/or corrupt. The complexity of the tax code, for instance, facilitates tax cheating and creative accounting, and along with it the impression that tax compliance is actually lower than it is. Much of the legitimacy of the law, and the willingness of citizens to contribute to public goods, rests on the perception that others are doing their share. Complexity helps eat away at that perception, which is crucial to support the expansion of beneficial state activity.

The habit of finding sneaky ways to advance public goals in a political environment suspicious of government has also had a corrosive impact on liberalism. Searching for obscure mechanisms to plant public activism in rocky institutional and cultural soil, liberals have developed a habit of dishonesty and evasiveness rather than openly making the argument for a muscular role for government. This is why so few of liberalism’s successes build a platform for new rounds of reform.

I wish that Teles had come up with a more rigorous measurement of kludginess in this essay. Is American policymaking kludgier than it is in Germany or Japan, for example? After all, a fair amount of policy complexity is simply a response to the fact that modern life is complex. There’s no way around that.

Still, it’s a valuable essay and Teles’s basic point is well worth engaging with. Corporations regularly rail against the complexity of the tax code, for example, but they’re crying crocodile tears. Our statutory corporate tax rate is one of the highest in the world, but the actual tax rate that corporations pay is one of the lowest. Why? Because corporations have spent decades lobbying for a mind-boggling array of loopholes, exemptions, and changes in definitions. Likewise, Wall Street complains that the Dodd-Frank financial regulation bill is too complex, but they’ve spent the past couple of years trying to make it even more complex. Why? Because complexity is their friend. Simple, blunt rules are hard to evade, but complex ones have lots of escape hatches for those clever enough to find them. And make no mistake: the rocket scientists on Wall Street and the tax accountants at Fortune 500 firms are as clever as they come. So are their lawyers, who will spend the next decade getting agency rulings and court decisions locking in place all the loopholes that the rocket scientists discover.

And Teles is right that this love of complexity has affected liberal policymaking too. I’d take a guess at two basic causes. The first is a natural affinity for fairness. We want social policies to be fair, and that means (a) making sure that not a single deserving person is excluded, and (b) making sure that not a single undeserving person gets benefits they shouldn’t. We’re just not willing to accept 95 percent fairness anymore, and that leads us down a rabbit hole of ever increasing complexity. The second cause is that conservatives have made social policymaking so hard that it can only happen if it’s hidden in the fine print, so to speak. This means accepting a second or third-best option that doesn’t raise too many hackles, rather than a first-best option that might be both better and cheaper, but can never get through the legislative process.

So what’s the answer? Teles has several suggestions, but ends with this:

All of the suggestions I have laid out in this last section will have only marginal effects unless policymakers come to be embarrassed to be associated with kludginess. The only viable way to do so is to increase the visibility of policy complexity’s costs, so that more publicly-spirited politicians seek to minimize them, while their more electorally-minded colleagues are made to worry about being held responsible for them. As the late Sen. Moynihan argued, what counts is what’s counted. While CBO deficit scoring powerfully influences the alternatives politicians consider, the large compliance costs associated with kludgeocracy are uncounted, and thus invisible. Requiring that CBO issue an estimate of governmental and private compliance costs along with its deficit score would reduce somewhat the incentives to lower deficit estimates by substituting more complicated alternatives.

We’ve built up way too many barnacles on the ship of state, and the truth is that more transparency would be good for everyone. It would be good for conservatives because it would make the costs of programs more obvious, and when taxpayers understand how much programs cost they’re less excited about expanding them. But it would also be good for liberals because it would allow us to design better programs that make government more efficient, and a more efficient government with fewer corporate subsidies is one that taxpayers are more likely to support. There’s more to it than just that, though, and the entire essay is worth a read