Guess what? It turns out that if you have only one political forecasting metric—modern conservatives are loons and will always act the part—your forecasting accuracy goes up. On Wednesday, I reminded everyone that 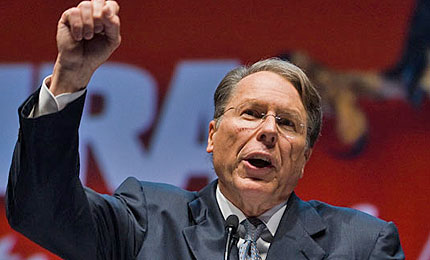 when the NRA announced after the Newtown massacre that it was “prepared to offer meaningful contributions to help make sure this never happens again,” it meant nothing of the kind. But even at that, I wasn’t quite prepared for this:

In his first extensive public remarks since the mass shooting at a Connecticut school last Friday, the head of National Rifle Association called Friday for lawmakers to take action to put police officers in schools in an effort to curb violent outbreaks like the one that took place last week.

“The only thing that stops a bad guy with a gun is a good guy with a gun,” NRA Executive Vice President Wayne LaPierre said at a news conference in Washington…. “Politicians pass laws for gun-free school zones, they issue press releases bragging about them … in doing so they tell every insane killer in America that schools are the safest place to inflict maximum mayhem with minimum risk,” said LaPierre, head of the nation’s largest gun-rights group.

You really need to read the entire transcript of LaPierre’s comments, italics and all, to get a full sense of what he was saying. You can practically see the flicks of spittle in your mind’s eye. Here’s a small taste:

Now, I can imagine the shocking headlines you’ll print tomorrow morning: “More guns,” you’ll claim, “are the NRA’s answer to everything!” Your implication will be that guns are evil and have no place in society, much less in our schools. But since when did the word “gun” automatically become a bad word?

….With all the foreign aid, with all the money in the federal budget, we can’t afford to put a police officer in every school? Even if they did that, politicians have no business — and no authority — denying us the right, the ability, or the moral imperative to protect ourselves and our loved ones from harm.

The real problems, according to LaPierre, are Hollywood, video games, the national media that reports on gun massacres, demonization of firearms, and a defenseless population. America’s 300 million guns not only have nothing to do with gun massacres, they’re the answer to gun massacres.

Astounding. I figured that LaPierre would at least pretend to be willing to have a “dialog” about gun laws. But no. He let us have it with both barrels, so to speak. Republicans have now gotten their marching orders.