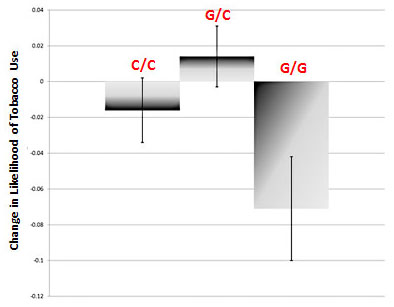 Are the incentive effects of taxes genetic? Do some of us respond more strongly to tax increases than others? Probably not. But in the case of tobacco taxes, we might. Here’s what a new study says:

This study used a moderated regression framework to test the association between current tobacco use and (i) CHRNA6 genotype, (ii) the logarithm of state-level tobacco tax rates and (iii) their interaction….Like previous literature, the G/G genotype is protective, as are high tobacco taxes; the interaction between CHRNA6 and tax rates showed that the effect of the tax is only present for individuals with the protective (G/G) genotype (p<.01) and absent in other individuals.

This study showed that the impact of tobacco taxation on tobacco use is moderated by individual genotype. Indeed, only individuals with the protective G/G genotype were found to respond to state level tobacco taxation rates, suggesting an important clue in understanding why the rates of tobacco use among US adults have remained stubbornly persistent during a time period of large changes in tobacco control policies during the past two decades.

So there you have it. Who knows? Maybe someday researchers will analyze Paul Ryan’s DNA and discover other genes that elevate aversion to taxes in general. We could even make a TV show out of it, sort of a cross between CSI and West Wing. Science marches on.