How much new oil production can the United States get from shale formations like Bakken or Eagle Ford? The usual estimate is in the neighborhood of 3 million barrels per day by 2020, but I’ve read a few suggestions that this may be a considerable overestimate. The problem is that 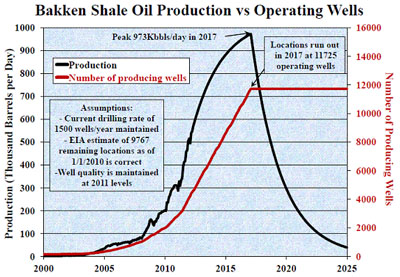 shale oil wells decline very rapidly, which means you have to drill a lot of wells to keep production at that level.

James Hamilton recently attended a lecture by David Hughes of the Post Carbon Institute, and he passes along some hard numbers on this. According to Hughes, the average well declines about 70% in its first year and about 30% per year over the succeeding four years. In the case of Bakken, which is the biggest shale formation currently active, this means that it might well hit its expected production rate of 1 million barrels per day, but it will then decline very rapidly, down to almost nothing within a few years. The chart on the right shows just how fast the decline occurs.

If this turns out to be accurate, and if it applies to other shale formations as well, the United States will never hit that 3 million barrel target. Declines in early fields will begin sooner than expected, and production from later fields will barely be able to keep up. By 2030 or so, shale oil might be played out completely. Shale oil is still likely to be important, but if Hughes is right, it might be less important than we think.