From Atrios, here is the short version of what Republicans really want:

Yes I repeat myself. Endlessly. But this is all about enacting an elite consensus policy which involves kicking the poors and olds, funneling ever more money to Defense and Finance, and cutting taxes on rich people.

Think back to Mitt Romney’s proposed budget. Medicare and Social Security were held harmless for at least 10 years. Defense spending got a lift. PBS and the National Endowment for the Arts were on the table, but they cost so little it hardly mattered.

The only big cuts Romney ever proposed were to programs that aid the poor. He wanted to block grant — which is to say, sharply cut — Medicaid, food stamps, and housing assistance. He wanted to get rid of the tax cuts enacted in the stimulus to help the poor — that’s why his tax plan actually raised taxes on the poorest Americans. He wanted to repeal all the spending in Obamacare, most of 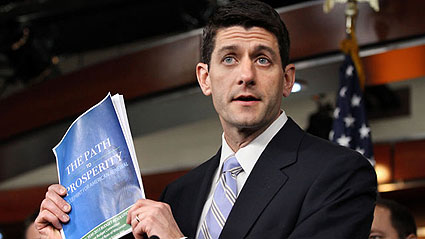 which goes to lower-income Americans….Nor was Romney a major outlier on this: About two-thirds of the cuts in Rep. Paul Ryan’s budget came from programs for the poor.

So Atrios’s version needs a slight amendment: it’s all about kicking the future olds. For all their bluster, Republicans will never propose anything that seriously affects the current elderly because that’s a huge part of their base. And the current elderly won’t tolerate any cuts to their Social Security or Medicare benefits.

As for Paul Ryan, his annual plans all have one thing in common. Allow me to quote myself:

Every year we get a slightly different version of the same old thing, and every year we have to waste entire man-years of analysis in order to make the same exact points about it. And the biggest point is that his budget would force enormous, swinging cuts in virtually every domestic program, especially those for the poor. If this bothers Ryan, he’s had plenty of time to revise his budget roadmap to address it.

But he hasn’t. He knows perfectly well that his budget concentrates its cuts on the poorest Americans. It’s been pointed out hundreds of times, after all. If he found that troublesome he’d change it. Since he hasn’t, the only reasonable conclusion is that this is exactly what he intends. Let’s stop pretending otherwise.

Paul Ryan can talk about compassion for the poor all he wants, but his numbers don’t lie. And he knows exactly what they mean. The Ryan budget would hold down taxes on the rich, keep spending on defense high, and all but eliminate spending on the poor. I’m not being partisan or argumentative about this: It’s all there in black and white and Ryan does little to hide it. For some reason, though, it rarely gets reported that way.