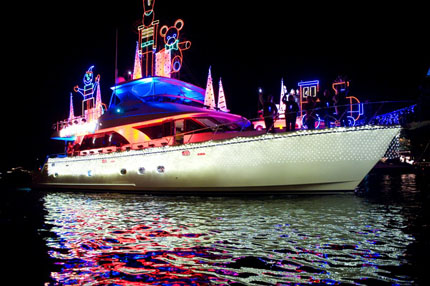 Would you like to hear a story about rich people in America today? It’s a small one, but it says a lot in a nutshell. It takes place just down the road from me in Newport Harbor, which, it turns out, needs renovation:

The city’s five-year plan for the harbor calls for $29 million in long-overdue maintenance. Its silt-filled channels haven’t been fully dredged since the Great Depression. Ancient, leaky sea walls protecting neighborhoods need to be repaired or replaced. “We have the makings of a perfect storm like they did on the East Coast” during Superstorm Sandy, said Chris Miller, the city’s harbor resources manager. “The sea walls are nearing the end of their useful life.”

So the city of Newport Beach, home of the rich and famous, needs $29 million to maintain the harbor. Where to get it? Let’s now skip up to the top of this story to see what caught the LA Times’ interest in the first place:

An increase in city rental fees for residential docks that protrude over public tidelands created a furor when it was approved last week by the City Council. It also prompted a call to boycott the boat parade and festival of lights by a group calling itself “Stop the Dock Tax.”

“It costs us thousands of dollars to voluntarily decorate our homes and boats to bring holiday smiles to nearly 1 million people,” organization Chairman Bob McCaffrey wrote to the city. “This year, we are turning off our lights and withdrawing our boats in protest of the massive new dock tax we expect the City Council to levy.”

….Newport’s dock fee, which has stood at $100 a year for the last two decades, will now be based on a dock’s size. The city says rents will increase to about $250 for a small slip to $3,200 annually for a large dock shared by two homeowners. “People have been paying $8 a month all these years to access what is public waters,” said Newport Beach City Manager Dave Kiff. “That’s a pretty good deal. The City Council didn’t think the increase it approved was too extreme.”

Got that? These docks would probably be worth tens of thousands of dollars if they were auctioned off, free-market style. But the boycotters, who I’d guess are free market fans one and all, are outraged that they won’t be allowed to use these docks for $100 per year forever. The free market might be a great idea when it comes to setting the wages and salaries of working folks, but using it to set the fees for dock rental in one of the richest communities in America? That’s outrageous.

In fairness, the complainers are a small fraction of the Newport Harbor community. Still, they’re a loud fraction, and it’s this sense of entitlement from the very loud, very rich that drives so much public policy in America. No matter how well they do—and the rich have done very, very well over the past few decades—their blood boils at the thought of contributing so much as an extra dime to public coffers, even if the money is specifically earmarked to improve their own communities.