I still haven’t seen Zero Dark Thirty, so I should probably continue to maintain a discreet silence on the question of whether it suggests that CIA torture of al-Qaeda prisoners provided one of the clues that led to the killing of Osama bin Laden. Still, Andrew Sullivan, whatever else you can say about him, has been about as 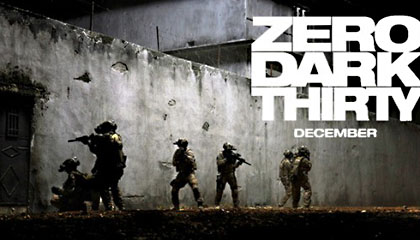 rock solid an opponent of torture as you can imagine, and he knows the background of the CIA program backward and forward. So it’s worth listening to his conclusion after seeing the movie:

Why include the torture at all? It played no role in finding any clues as to the whereabouts of bin Laden in the movie and in reality. The breakthroughs in the movie come from traditional interrogation and intelligence. In only one instance is torture even remotely connected to a real clue. That’s when a previously tortured suspect — driven to near insanity and oblivion by sleep deprivation — is tricked into believing he had already revealed something when he hadn’t. That’s classic good interrogation: bluffing. Yes, the suspect was more easily coaxed because the premise of the bluff is that he cannot remember what he may or may not have said because of torture. But the trick could have worked in other circumstances. And he gives up information while being outside the torture rooms, and offered food and drink in a restaurant.

….It may be that many people watching this movie will actually believe the torture was integral to the end-result. But that will be because they want to see that or because they are as dumb as Owen Gleiberman. It isn’t there. And if they want to see that, they will also be forced, at least, to own the barbarism depicted on screen in a way that euphemisms like “sleep deprivation”, “stress positions” and “enhanced interrogation” were designed to obscure.

I’ll keep this brief because, as I said, I haven’t seen the movie yet. I take Sullivan’s judgment seriously because of his long years keeping up the fight against torture. But there’s a danger that the movie is acting as something of a Rorschach test. Sullivan is appalled by torture, so he’s convinced that seeing it on the big screen will horrify viewers, who won’t really connect it with the tidbit of information later revealed in the restaurant. But that may just be projection. Yes, grisly scenes will be grisly no matter what, but a lot of viewers who aren’t especially appalled by torture might not be as horrified as Sullivan, and might very well connect it to the tidbit from the restaurant. To Sullivan, “more easily coaxed” might seem like a trivial thing, but there’s no certainty that other viewers will see it the same way.

That’s it for now. If I see the movie next week I’ll have more to say then.