Are big cities more dangerous than small ones? Of course they are. This is so obvious that it’s not even a question most people would think of asking.

And yet, if you’ll bear with me for a bit, it turns out there’s more of a mystery here than you might think. In 1996, for example, Ed Glaeser and Bruce Sacerdote wrote a paper trying to figure out why there’s more crime in big cities. They came up with a couple of reasons. First, there’s more valuable stuff to steal in big cities, so robbery is more profitable. Second, it’s easier to be anonymous. If you mug someone in Mayberry, there’s a good chance your victim will recognize you and report the crime. Beyond that they threw up their hands, suggesting that perhaps the rest of the difference might be due to the fact that families are less intact in big cities. But even after running batteries of statistical tests, they were still left scratching their heads. Sure, there are more broken families in big cities, but that “still leaves unanswered the question of why this variable is so important in leading to criminal behavior.” What’s more, “the results on higher benefit levels and lower arrest rates are intriguing but also not entirely satisfying.”

Well, if that’s not satisfying—and it isn’t—how about an answer out of left field? Maybe the real answer is that big cities aren’t much more dangerous than small ones. Let me explain.

One of the hallmarks of a good theory is that it answers questions you didn’t even know you had, and it turns out that the answer to this mystery might lie in the association between gasoline 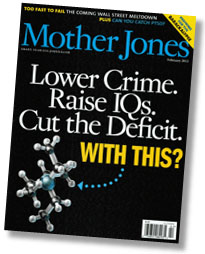 lead and violent crime. I mentioned this briefly in “Criminal Element,” my magazine piece about the lead-crime connection, but it deserves a little more explanation. So here it is.

In a nutshell, the lead-crime hypothesis is simple: Exposure to gasoline lead in small children produces heightened aggressive tendencies. When an entire generation of children was exposed to lead in the ’40s, ’50s, and ’60s, thanks to the boom in auto sales after World War II, it led to a huge rise in violent crime when the children grew up in the ’60s, ’70s, and ’80s. The more lead they were exposed to, the more crime you got.

So where did we see the most exposure to gasoline lead? Answer: in places with the densest concentration of automobiles. And that’s in the inner core of big cities. In the early ’60s, big cities had double the ambient air lead levels of midsize cities, which in turn had air lead levels 40 percent higher than small cities. (Nevin, p. 316.) So if lead exposure produces a rise in crime, you’d expect to see a bigger rise in big cities than in small ones. Over time, big cities would become increasingly more dangerous than small ones.

Likewise, when lead was removed from gasoline, and children started to grow up normally, you’d expect to see a bigger crime decrease in big cities. Over time, crime rates would start to converge.

And that’s exactly what we see in the data. In the ’70s and ’80s, when big cities had their highest levels of lead-poisoned teenagers, they really were more dangerous places than small cities. But we began removing lead from gasoline in the early ’70s, and right on schedule, crime rates in big cities peaked in 1991 and then started falling. The chart on the right tells the story. The top line is average rate of violent crime for every city in 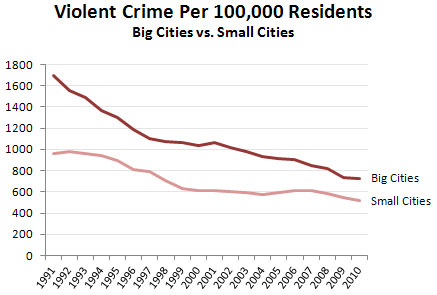 America with a population greater than 1 million. (Only Chicago is missing, because it lacks complete data.) The bottom line is the average rate of violent crime for cities with a population between 100,000 and 250,000.

The convergence between big and small cities is startling, and the biggest cities have shown the biggest drops. Violent-crime rates have declined by more than 75 percent in New York City and Los Angeles since their peaks in the early ’90s.

So the surprising truth is that big cities are only a bit more dangerous than small ones. For a few decades it seemed otherwise, but this was mostly an artificial difference driven by higher concentrations of gasoline lead. Take that away, and it turns out that Los Angeles isn’t much different from Modesto.