Are robo-polls as good as live-interviewer polls? Maybe! Some people have even suggested they’re better.

But wait. Gary Langer reports on an academic study of robo-polls during last year’s Republican primary that finds something strange: if the robo-polls are done after human polls have been done, they’re just as good as the human polls. But if they’re done in states where no human polls were done—that’s the red oval in the chart below—they do significantly worse. 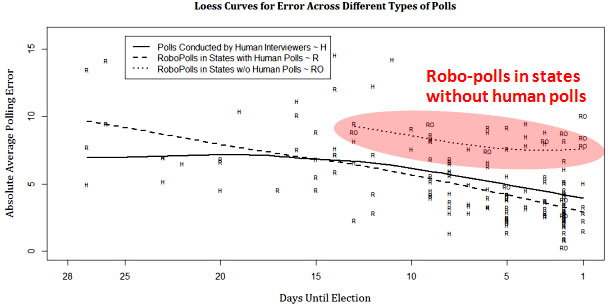 So what’s going on? The researchers make two suggestions. First, the poor results in the red oval are based on a small number of polls in just five states, so “it’s possible that what’s going on is something goofy in those five states.” Alternatively, the folks doing the robo-polls might be massaging their results. The researchers say their analysis “suggests, but certainly does not prove, that at least some IVR polls may use earlier human polls to adjust their results to ensure that they are not notably different from existing polls and beliefs.”

The full paper is here. Stay tuned for further research.