Paul Waldman pens a bittersweet farewell to Sarah Palin, now that she’ll no longer be appearing on Fox News:

There are few political figures remotely as interesting as Palin, with her unmatched combination of crazy ideas, absolute confidence despite a level of understanding of public affairs that would embarrass an average seventh-grader, and a nearly inexplicable white-hot charisma.

….There really should be a long German word referring to the feeling liberals got whenever Palin said something even more idiotic and offensive than she had before, that combination of shock, disgust, and satisfaction that comes from getting yet more evidence that one of the other side’s leading figures is such an 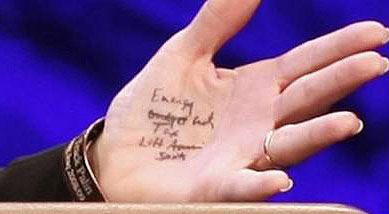 epic nincompoop. Every time, you could almost hear a thousand conservatives plant their faces in their hands.

Palin’s theme was always resentment, the acid bile of the culture war. If you ever felt that you were looked down on by Northeastern elitists, or people with too much education, or condescended to by people who think small towns are rather boring and not the only soil from which morality and patriotism can grow, or laughed at by people who find The Purpose-Driven Life to be a less than profound theological text, Sarah Palin spoke for you. She luxuriated in her grievances—against the establishment, against the media, against everyone from the mightiest politician to the lowliest teenager who happened to knock up her daughter (as Levi Johnston put it at one point, “It’s almost funny, that she’s like, 46 years old, and she’s battling a 19-year-old, and I’m winning”). Resentment was her instrument, her tool, her vehicle and her purpose.

Sarah Palin is to modern Republicans what Richard Nixon was to Republicans of the 60s. The resentment that Nixon tapped so brilliantly reached its peak under Ronald Reagan and then degenerated steadily over time. The downward path led through Rush Limbaugh, Newt Gingrich, Roger Ailes, and freedom fries, finally reaching its debased apotheosis in Sarah Palin and the tea party. With her gone, it might be a sign that the long, twilight success of Nixonland as a political strategy is finally starting to fade. I think Rick Perlstein should write a few thousand well-chosen words on the subject.