The chart below has been making the rounds today, so I thought I’d colorize it and annotate it to drive home its point a little more clearly. Republicans like to say we have a spending problem, not a taxing problem, but the evidence doesn’t back that up. Total government spending didn’t go up much during the Clinton era, and it’s actually declined during the Obama era. In the last two decades, it’s only gone up significantly during the Bush era, the same era in which taxes were cut dramatically.

What we have isn’t a spending problem. That’s under control. What we have is a problem with Republicans not wanting to pay the bills they themselves were largely responsible for running up. 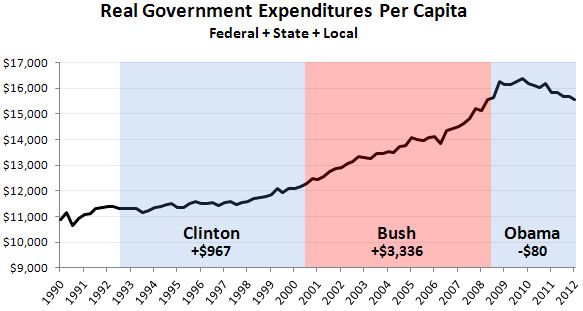