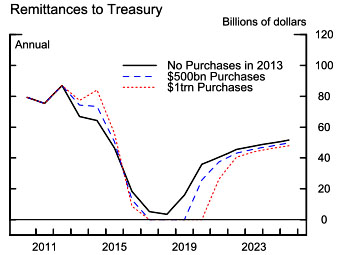 Over the past few years, the Fed has been hugely profitable, sending more than $50 billion annually to the Treasury. The Wall Street Journal reports today that this gravy train may come to an end a few years from now, but don’t shed too many tears for the folks in the Eccles building:

How great is that to be an agency that can just twiddle a few bits in its computer system whenever it needs to cover its budget? Sure, you knew already that the Fed could print money, but this makes it all a little bit more concrete, doesn’t it?