Deborah Blum comments on my story about the link between lead and crime:

In this latest story, [Drum] goes much farther in embracing lead as the primary cause of violent crime, so much farther that that it’s worth asking whether leaded gasoline, as he asserts, does explain as much as 90 percent of the rise and fall of violent crime. Does it trump drugs, poverty, urban gang warfare, education, and other such issues to the point that they account for 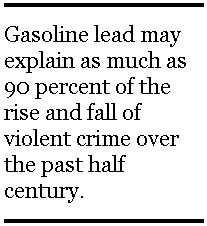 a bare ten percent of the crime statistics. That’s a harder case to make, partly because as Drum himself notes correlation is not causation: the fact, for instance, that falling crime follows a pattern of falling lead exposure doesn’t rule out many other influences.

This is a legitimate criticism. Blum is referring to the callout on the right, which runs alongside my article, and as a standalone headline I think it goes too far. It’s true that one researcher has suggested that lead can explain 90 percent of the rise and fall of crime, but that’s very much the high end of the estimates in the field. I’m a lot more comfortable with an estimate of around 50 percent, something I should have made clearer in the text of my piece. In other words, lead probably explains a very big chunk of the rise and fall of postwar crime in America, but it doesn’t trump everything else. Drugs, poverty, urban gang warfare, education, policing tactics, and other things also play a role.

I’m mentioning this because a number of people have gotten derailed by the implication of the 90 percent number, namely that virtually nothing else matters when it comes to crime. That’s really not the point I wanted to make. Lead is a big factor, but it’s not the only factor.