Ryan Grim and Sabrina Siddiqui of the Huffington Post got hold of a PowerPoint presentation for incoming members of Congress. It comes from the Democratic Congressional Campaign Committee and lays out, as 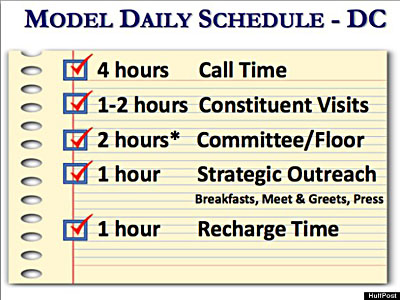 the authors says, “the dreary existence awaiting these new back-benchers.” In particular note that they expect five hours out of every day to be devoted to fundraising (call time + strategic outreach).

That’s no surprise, really. What’s also no surprise, I suppose, is the number of hours they expect new members to engage in studying up on the issues. That number would be zero. I guess that’s what staffers are for. No need to fill their beautiful minds with tedious policy stuff when there’s money to be raised, after all.

This is why I don’t understand the bipartisan opposition to publicly funded elections. I mean, every member of Congress hates this stuff:

It’s miserable business. “What’s my experience with it? You might as well be putting bamboo shoots under my fingernails,” said Rep. John Larson (D-Conn.), a high-ranking Democrat.

….On Capitol Hill, call time evokes a rare bipartisan accord. “An hour and a half is about as much as I can tolerate. There’s no way to make it enjoyable,” Rep. Reid Ribble (R-Wis.) told HuffPost….Former Rep. Tom Perriello (D-Va.), now a top official at the Center for American Progress, said that the four hours allocated to fundraising may even be “low-balling the figure so as not to scare the new Members too much.”

Right. So for purely selfish reasons, why not relieve themselves of this nasty business and agree to 100% publicly funded elections? Are they masochists?