The Department of Labor released its latest report on union membership today, and it’s no surprise that private sector union membership continued its long-term decline, down from 6.9 percent last year to 6.6 percent this year. To give you an idea of what this means in real-life terms, here’s the latest data on the difference in wages between unionized and nonunionized workers. It doesn’t distinguish between job categories, so it exaggerates the actual premium, but this nonetheless gives you a sense of just what it means to actual people, in terms of dollars and cents, that private-sector union membership has shriveled to almost nothing in recent decades. It’s left as an exercise for the reader to figure out who’s getting this union premium now that so few corporations have to pay it to their workers. 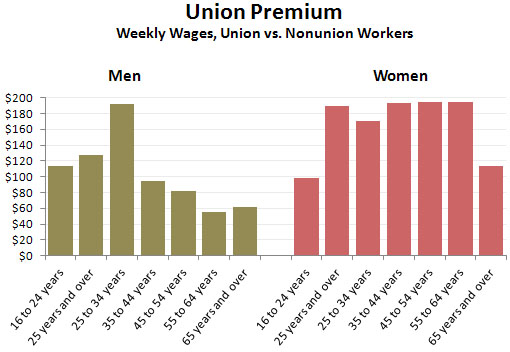