Ever since Ronald Reagan first said it, Republicans have been fond of insisting that “we don’t have a revenue problem, we have a spending problem.” But it turns out that isn’t true. Let’s take a look at the raw data.

Spending first. In 1981, when Reagan took office, the federal government spent 22.2 percent of GDP. That figure dropped steadily for the next two decades, and by the year 2000 spending was down to 18.2 percent of GDP. Expenditures went up after that, but the Office of Management and Budget estimates that by 2017, spending will once again be 22.2 percent of GDP, exactly the same as it was 30 years ago. In other words, spending hasn’t gone up at all.

But even that overstates the problem. The chart below shows federal spending since the Reagan era. You’ll notice a few things:

But even with the 2008 recession, federal spending is still on track to be lower a decade from now than it was when Reagan took office. More details here. The plain fact is that spending simply hasn’t been our big problem over the past three decades. 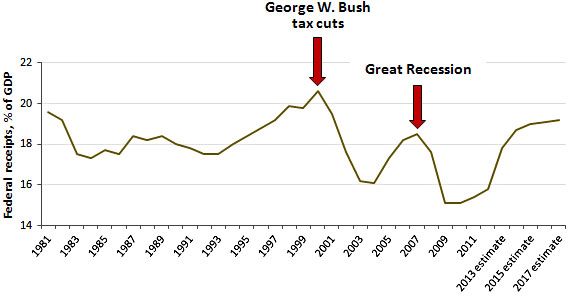 The facts are pretty clear. Spending isn’t our big problem. The recession spike of 2008 aside, it’s about the same as it was 30 years ago. But instead of paying for that spending, we’ve repeatedly cut taxes, which are now at their lowest level in half a century. Tax revenue will go up as the economy improves, but even five years from now it will still be lower than it was when Reagan took office.

So what’s our real problem? That’s simple: America is getting older and healthcare costs are rising. That means we’ll need to spend more money in the future on Social Security and Medicare. There’s simply no way around that unless we’re willing to immiserate our elderly, and that’s not going to happen. Not only is it politically inconceivable, but the truth is that even Republicans don’t want to do it, no matter how tough a game they talk. Like it or not, this means that over the next 20 or 30 years, spending on the elderly is going to go up by three or four percent of GDP.

This is where we stand. Spending in general has been well controlled for the past 30 years, averaging about 21 percent of GDP. With good management, that might go down a point or two, but certainly no more. Probably the lowest we can realistically hope for is about 19-20 percent of GDP. Add in the increased spending on the elderly, and federal outlays are going to be in the neighborhood of 23-24 percent of GDP by around 2030.