Here’s an intriguing chart from the New York Times. It shows how teenagers around the world scored in a science exam conducted by the OECD. Higher scores are, obviously, higher, and scores on the right show countries where girls scored higher than boys. The regional breakdown is pretty interesting. In the Americas and western Europe, boys generally did better than girls. But in Asia, the Middle East, and in eastern Europe, girls generally did better.

The reasons are unclear. One of the researchers suggests that girls in the United States are victims of “stereotype threat,” and that girls are also less likely than boys to “see science as something that affects their life.” But I’m hard pressed to believe that this is less of an issue in Asia and the Middle East than in northern Europe and the United States, so I don’t find this a very satisfying guess.

In any case, click the link for a full-size, interactive version of the chart. 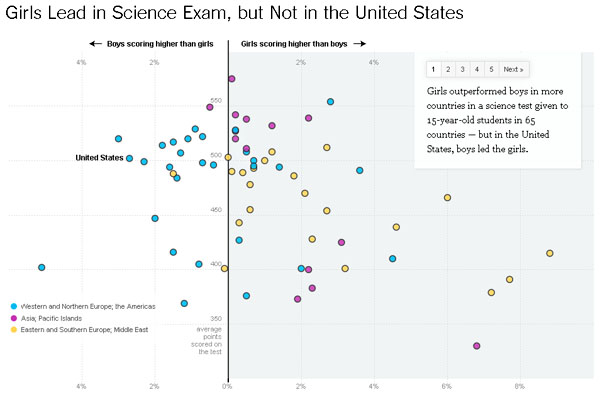