American Airlines has now officially announced its merger with US Airways, which brings to an end the era of massive consolidation in the domestic airline industry. This era was sparked by the 1979 deregulation of the industry, and Steven Pearlstein declares it a success:

While consumers are already grumbling that prices are rising, a longer-term look shows that, on an inflation adjusted basis, prices (including those pesky fees) are still well below what they were in the old regulated environment, and even below what they were in during the late 1990s when the consolidation process was only partially complete. Here are the numbers, in chart form:

And sure enough, there’s a chart showing that average fares today are half what they were in 1979.

And yet….a few months ago, Phillip Longman and Lina Khan wrote a piece in the Washington Monthly setting out the case that airline deregulation was a miserable failure. I was not entirely convinced. But one of the strongest claims they made was that, far from reducing fares, deregulation may have been bad for fares:

A study published in the Journal of the Transportation Research Forum in 2007 confirms that the pattern continued. Except for a period after 9/11, when airlines deeply discounted fares to attract panicked customers, real air prices have fallen more slowly since the elimination of the CAB than before. 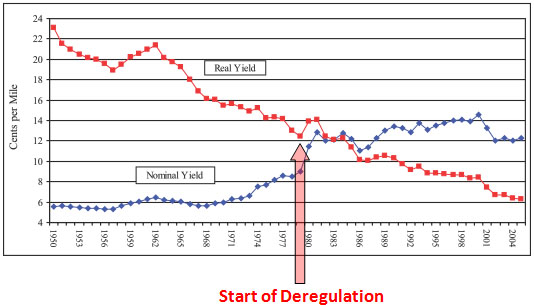 These calculations are complex, and appear to be extremely sensitive to the assumptions that go into them. For that reason, I’m hesitant to draw any firm conclusions. What’s more, it’s possible that the fare declines of the 60s and 70s would have tapered off without deregulation, as passenger volumes flattened and airplane technology stabilized. The counterfactuals here aren’t easy to construct.

Nonetheless, this chart has been gnawing at me ever since I saw it, and today I have an excuse to publish it. At the very least, it should cause us to question the conventional wisdom that no matter how much you hate airlines, at least the deregulation of the industry has been a boon for low prices.