Austin Frakt draws my attention today to a new article about the administrative costs of Medicare. Exciting stuff! Long story short, Kip Sullivan of the Minnesota chapter of Physicians for a National Health Program wants everyone to understand just what’s involved in figuring out the true administrative costs of Medicare. The cost of collecting payroll taxes is one frequently overlooked element, for example. More interestingly, though, there’s a large and growing gap between the overhead calculations of the Medicare Trustees and those of the National Health Expenditure Accounts. Why is that?

In the case of prescription drugs, it’s possible that higher overhead is justified by the lower overall program costs we get from having a lot of competing plans. In the case of Medicare Advantage, it’s just pure waste. We have higher overhead and higher overall costs, with very little benefit to show for it. As Sullivan says, this should “long ago have triggered inquiries within Congress and the US health policy community as to whether the higher administrative costs associated with the growing privatization of Medicare are justified.” 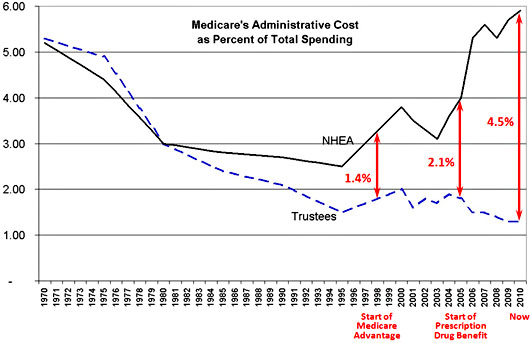