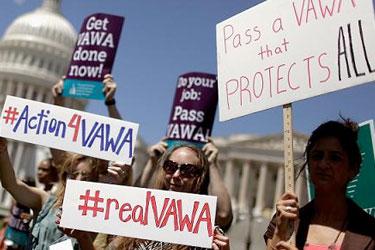 The House finally reauthorized the Violence Against Women Act today despite the opposition of more than half the Republican caucus. Steve Benen thinks this means the wind is shifting on the venerable Hastert Rule:

We’re learning something important about House Speaker John Boehner (R-Ohio) and the so-called “Hastert Rule.” For those who need a refresher, under modern Republican norms, the Speaker only considers legislation that enjoys “majority of the majority” support — if most GOP House members oppose a measure, it won’t even be considered, whether it can pass the chamber or not.

The non-binding rule is great for party discipline, but lousy for democracy and governing.

For Boehner’s part, the Speaker has long believed in enforcing the “Hastert Rule,” but he’s finding far more flexibility on the issue than we’re accustomed to seeing. When it was time to approve the “fiscal cliff” deal, Boehner ignored the rule to pass a bipartisan Senate plan. When he needed to pass relief aid to Hurricane Sandy victims, he bypassed the rule again.

At the time, the Speaker said these were isolated incidents that wouldn’t be repeated, but he we are again — most of Boehner’s caucus opposed the Violence Against Women Act, but he brought it to the floor and passed it anyway.

I guess my takeaway is a little different: This is mostly a sign that Boehner understands what his party is up against. In the last election, Republican problems with the Hispanic vote got most of the attention, but that’s not the only demographic group the GOP is losing badly. There’s also women. And young voters. And especially young women voters: in the last two elections, they’ve voted for Obama by whopping margins of 69 and 66 percent.

So in the same way that pragmatic Republicans are in favor of passing some kind of comprehensive immigration bill to stop the bleeding among Hispanics, Boehner wanted to pass VAWA in order to stop the bleeding among young women, for whom this is very much a hot button issue. This same dynamic might play out on a few other issues too, but I’m not sure if it heralds the demise of the Hastert Rule more generally. We’ll have to wait and see.