Simon Johnson writes today about the scourge of banks that are too big to fail. Cyprus is the latest example of what happens when a megabank fails, and it’s fresh on everyone’s minds:

The good news at the end of last week was that the Senate unanimously decided that the United States should go in another direction, by ending the funding advantages of megabanks.

….But making last week even more decisive, [Ben] Bernanke’s language shifted significantly….saying in the clearest possible terms during a news conference on 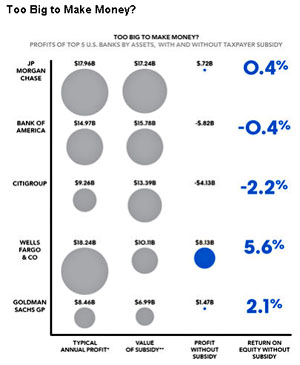 Hmmm. This seems optimistic. Has the policy consensus really shifted? I hope I’m wrong, but what we’re seeing right now seems more like one of those little boomlets that crop up and then disappear regularly. Remember NGDP targeting? For a period of a few weeks when it got mentioned in a set of Fed minutes, the economics blogosphere couldn’t get enough of it. But it was never going anywhere, and it never did.

But enough pessimism! If there’s any movement at all toward going beyond Dodd-Frank to make banks safer, that’s good news. I’ve always been skeptical, on both political and practical grounds, that big banks can literally be broken up or their size capped, but they can certainly be made safer by requiring much higher capital levels. And you could probably go a long way toward encouraging smaller banks by introducing a formula that set higher capital levels for bigger banks. Who knows what would happen if required capital was a minimum of 10 percent or, say, double your bank’s assets as a percentage of U.S. GDP? If a bank the size of Citigroup had to hold twice the capital of a smaller bank, that would certainly provide a big incentive to break up.

I don’t know how feasible this kind of thing is on a national basis, and further international action doesn’t seem to be in the cards these days. But every little bit helps. We’ll see if the coming months produce anything more than a purely symbolic vote on a nonbinding resolution by the Senate.