Dan Drezner and I have had a friendly argument going on for several years about public attitudes toward trade. He’s a worrywart who trembles in fear whenever some pol badmouths China during a primary in Ohio. I’m a Pollyanna who thinks it’s a testament to the fundamental popularity of global trade that the Great Recession produced only a few tiny glimmerings of protectionist 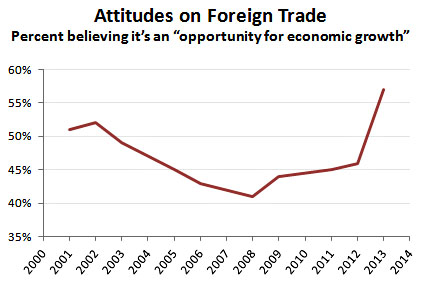 sympathy. Today I’m declaring victory. Dan himself links to the latest Gallup polling on trade, summarized in the chart on the right, but then tries to wiggle out with this comment:

Astute readers might argue that this disproves my oft-repeated claim that the American people are stone cold mercantilists. [Yes indeed. –ed.] To which I say, look at the question that’s being asked — exports good, imports bad. The mercantilism is baked into the polling question!! Essentially, what this poll reveals is enthusiasm for exports, not trade more generally.

That said, a closer look at the poll also suggests something even more promising. It would appear that public enthusiasm about trade exports is a leading indicator for rational expectations of U.S. economic growth….We’re now in the realm of pure speculation, but another source of American optimism on trade comes from some of the underlying positive trends I talked about a year ago. U.S. consumers are almost done with their necessary deleveraging; the U.S. manufacturing sector continues its small boomlet; and projections about U.S. energy production have become even more optimistic.

These are all intrinsically good trends, but the spillover effect on American attitudes towards trade is particularly promising. The spike in public enthusiasm from last year is politically significant. At a minimum, it suggests that president Obama won’t face gale-force headwinds in trying to negotiate trade deals.

Humbug. Of course people are more enthusiastic about exports than imports. But by a margin of 57-35, they see the upside of exports as a bigger deal than the downside of losing their jobs to cheap imports. That’s as close to enthusiasm for trade in general as you’re going to find outside of a Brookings seminar on comparative advantage. The economics profession should be proud of the public brainwashing it’s conducted over the past few decades on trade. It’s been remarkably successful even in the face of some pretty substantial headwinds.

And, as Dan himself has suggested before, this bodes well for the future prospects of trade deals with Europe and Asia during Obama’s second term. The public is OK with them; they’d be nice capstones to Obama’s legacy; and they’re among the few things that Republicans will probably be happy to support. I wouldn’t bet against them.