I see via TPM that Attorney General Eric Holder has written a new letter to Sen. Rand Paul. Here it is: 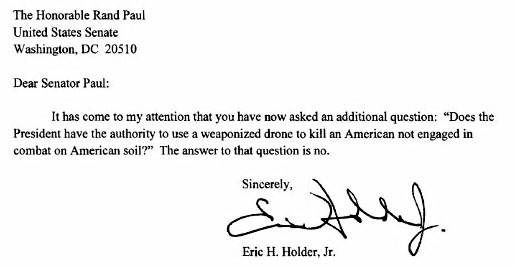 Points for drollery, I suppose. You have to appreciate the opening line: “It has come to my attention…..”

But this is still a weird reply. Or maybe just deliberately opaque, like the previous replies. If the president can’t use a drone to kill an American not engaged in combat, then he can’t use any other weapons to do this either. Right? There’s nothing special in the law about drones, after all. So why not say so?

In addition, of course, the definition of “engaged in combat” is obviously key here. Without much more detail on that, this probably doesn’t really tell us anything new.

But maybe I’m overanalyzing this, or being too harsh. Rand Paul says he’s “quite happy” with this letter, so perhaps “combat” is precisely defined elsewhere. My cynicism level is fairly high based on the administration’s game playing over the meaning of “imminent” in their white paper about drone strikes overseas, but maybe it’s now a little too high. Comments?