In Paul Ryan’s budget roadmap, he lays out a “goal” of reducing the top tax rate from 39.6 percent to 25 percent. That’s a big tax cut for the rich! Is it possible to do this while (a) keeping total tax revenue the same and (b) not raising taxes on the middle class to make up for it?

You may recall that we had this argument during the 2012 campaign, when Mitt Romney insisted he could do this by closing various loopholes but refused to say which loopholes he would close. That didn’t stop America’s tax analysts from digging into the numbers, though, and they concluded that his plan was impossible. The arithmetic just didn’t work. And since Ryan’s plan is even more aggressive than Romney’s, there’s really no chance it will work either. If Ryan 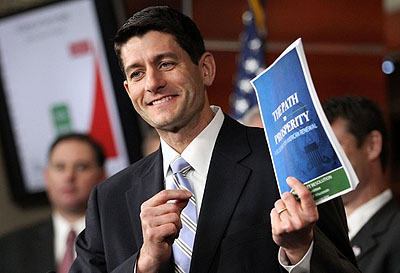 really wants to cut the top rate to 25 percent, then one way or another, the middle class is going to pay more.

Greg Sargent says Democrats are salivating at this thought:

I’m told that national Democrats are planning to mount a major campaign to hammer Republican candidates — particularly ones in swing areas — over a specific aspect of the Paul Ryan budget: The possibility that it could result in middle class tax hikes.

….When Romney found himself caught in this trap, it was devastating for him, because it perfectly laid bare the core priorities animating the GOP. It showed that the party was so committed to reducing tax rates on the rich — already a deeply unpopular position — that it was willing to further burden the middle class if necessary to do so, which would have been even more unpopular.

….And so, Dems are hoping to use the Ryan budget to ensnare Republican candidates, particularly ones in marginal districts, in the same trap that tripped up Romney. Only this time it could potentially be worse. After all, last time Republicans had just routed Democrats in the 2010 elections, and could plausibly argue that core questions about tax fairness, the size of government, and who should pay for it hadn’t been settled by the electorate. But now Republicans have committed themselves to this same set of policies and priorities after running on them in a presidential race and multiple Senate and Congressional elections and losing decisively across the board.

Well, we’ll see. It was never clear to me just how devastating this really was for Romney, though. The problem is that there’s nothing concrete to point to. The “middle-class tax increase” is the result of a bunch of calculations in a white paper, and that’s a little hard to get people riled up about. If it becomes an issue, Ryan will just do the same thing that Romney did: insist that the details will work out eventually, turning the whole thing into a tedious he-said-she-said spat between Democrats and Republicans. It will probably get tuned out pretty quickly.

So….I’m not sure about this. It might work, I guess. A juicy tax cut on the rich is never an easy thing to defend, regardless of how the numbers work out. I’m just not sure it’s a killer attack.