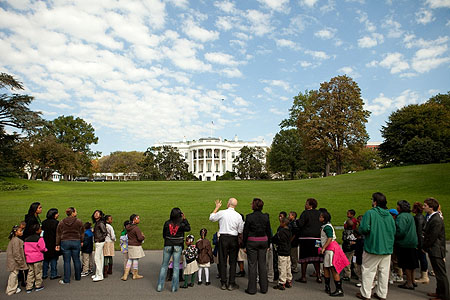 them privately, and they’re weighing a new resolution on the issue.

And don’t forget the Washington Post editorial board, which dedicated a big chunk of space to this today. They justify this by explaining that the cancellations were pretty obviously designed to be high profile in the first place: “The ham-handed tactic is employed when government is faced with budget cuts and officials go after the services that are most visible and appreciated by the public. It’s a kind of bureaucratic hostage-taking, so the pushback that the Obama administration has encountered is a proper comeuppance.”

Well, maybe. It’s certainly true that White House tours are booked through your local member of Congress, which means that when they’re canceled, that’s who you’re going to complain to. Supposedly this puts pressure on Congress to do something about the sequester. In reality, though, it’s mostly given Congress a chance to scream about how the president is politicizing the budget cuts. And since the press loves nothing more than a catfight that requires no tedious explanations of policy issues, this kind of shiny bauble is irresistible.

At the same time, the world is what it is. The White House isn’t staffed with political naifs. They knew what they were doing, they knew how Congress would react, and they knew how the media would treat it. They took a gamble that canceling the tours would apply some useful pressure, and they pretty much lost that gamble. Everyone saw right through it, and they were not amused.

That’s life. Nobody comes out of this episode looking especially good. Onward.