President Obama said today that he believes there are some Republicans in Congress who’d like to compromise with him to enact “common sense” solutions to America’s problems:

But they’re worried about their politics. It’s tough. Their base thinks that compromise with me is somehow a betrayal. They’re worried about primaries. And I understand all that. And we’re going to try to do everything we can to create a permission structure for them to be 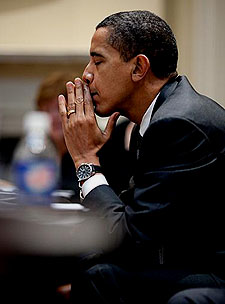 Good luck with that, Mr. President. I suppose “permission structure” means assembling enough conservative support, and/or framing legislation so that it addresses the concerns of “the base” (e.g., border enforcement on immigration) in a way that makes bipartisanship possible. But as we saw in the supreme example of the Affordable Care Act, even adopting conservative policy prescriptions right out of the Heritage Foundation playbook, as implemented by the man who would become the next GOP presidential nomination, didn’t prevent them from being demonized as representing the imposition of an alien “European-style” “government takeover of health care” aimed at totalitarianism and the slaughter of old people.

I’m sympathetic, because I agree. I don’t think that Republicans have declined to make a budget deal because Obama didn’t schmooze them enough, or because they didn’t understand what he was offering, or because Democrats haven’t framed their compromise proposals quite right. Republicans have declined to make a deal because they don’t like any of the deals Obama is willing to make. Full stop.

Unfortunately, I think Ed falls into the same trap when he suggests that Obama’s dinners with senators have gone quite far enough, thankyouverymuch. Instead, he says, “I’d recommend about four straight speeches about filibuster reform, followed by four straight speeches on what the sabotaging of the Affordable Care Act will actually mean for actual people. At a minimum, a Plan B to deploy if his umpteenth effort at bipartisanship fails is in order.”

The problem is that this almost certainly won’t work either. Obama made a full-court speechifying press on gun legislation, for example, and it had no effect at all. It wasn’t enough to pass even the watered-down Manchin-Toomey amendment, a bill that threw in so many goodies for gun owners that it might actually have been a net negative for gun control.

All of which gets us to the guts of the problem: most likely, nothing is going to work. But if you’re the president, you can’t say that. You can’t even act like it. You have to go out day after day after day insisting that progress is possible and deals can be made. This gets you lots of flak from fellow lefties who think it displays terminal naiveté, but what choice do you have? Obama pretty obviously understands everything that his lefty critics understand—he’s not an idiot, and this is hardly rocket science, after all—but he also understands one other thing: he can’t admit it. I imagine it’s frustrating as hell. But like it or not, presidents have to keep their chin up in public and keep trying to make things happen, even if they know perfectly well that success is unlikely. Welcome to hell.