What are the odds that immigration reform will pass? Opposition has already started to mobilize from, among others, Alabama Sen. Richard Shelby, who noted the other day, “We’ve seen this movie before — 27 years ago, remember?” Ed Kilgore comments:

Shelby, of course, is alluding to a “scandal” that most people outside conservative activist circles are at best dimly aware of: the 1986 immigration law that sold “amnesty” under the false flag of reform.

I guess this is true: most people who are neither conservative activists nor political junkies don’t really remember the 1986 immigration bill. But make no mistake: it’s profoundly driven the approach toward immigration reform from both left and right. Among tea partyish conservatives, the 1986 bill is universally considered one of the great betrayals of all time. They were promised tougher border security in return for a path to citizenship for undocumented immigrants, but in the end they got only a wave of newly legalized immigrants flooding into their towns and schools. The tougher border security was a mirage, discarded almost immediately, which naturally led to yet another 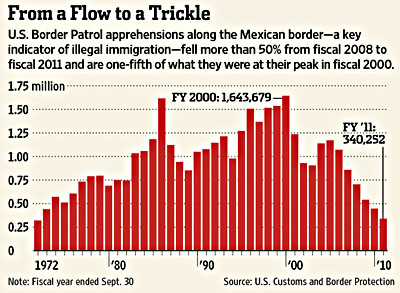 new wave of Mexicans crossing the border illegally and yet another call for a path to citizenship for them. As far as conservatives are concerned, they were played for suckers in 1986, and they’re not going to fall for this con again.

President Obama has done his best to blunt this anger by spending his first term getting tough on undocumented immigrants. E-Verify has been ramped up; deportations have become harsher and more intensive; fences have been built; and funding for the border patrol has been increased. Liberals have been incensed with much of this, but the result—with a big assist from the recession—has been a sharp decline in illegal immigration over the past few years. Generally speaking, Obama’s entire strategy with immigration reform has revolved around proving that he doesn’t plan a rerun of 1986. This time, he’s saying, there really will be tougher border security and tougher employer checks to go along with the path to citizenship.

Will this work? Conservatives have not been notably willing to credit Obama with much good faith in the past, and even Marco Rubio can only do so much to change that. Nevertheless, this has been the plan all along, and now we get to see if it works. If Obama can convince enough conservatives that he’ll be tougher than Reagan on border security, then immigration reform has a chance. If not, it will probably fail.